Message from our Chaplain Mairie

Year 6 in school
It has been an amazing few days welcoming our year 6 students from across all schools. And, on Friday, welcoming them as the new Year 7 cohort. In just those few experiences of St Nicholas, including finding out their new form saint, they are starting to become part of the family. Hopefully they will all feel much more settled after these visits and look forward to being with us in September. We are looking forward to welcoming them! 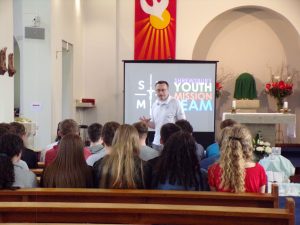 We had the very best of weather for our first Day of Reflection for our Year 12 students. The welcoming surroundings of St Bede’s in Weaverham gave everyone space to consider and reflect on their place in the world and what is important in taking their next steps. We thank Fr Paul and Sr Phyllis for being so welcoming to all our students. Sandy from Shrewsbury Youth Mission Team led a number of reflections on the treasures in life, as well as facilitating some enthusiastic games and challenges. Fr Simon, from St Joseph’s led a final reflection on making space for the treasure and letting go of what we don’t need.

Together with a leisurely lunch, the chance to be together with friends and classmates, and the beautiful weather, we had a day to remember.

Twitter accounts to help you support your child’s literacy

Richard Ruddick @RuddickRichard
A teacher in Norfolk who tweets about books and graphic novels. Some great reviews and suggestions for new titles to explore.
Empathy Lab Uk @EmpathyLabUk
An organisation which aims to build children’s empathy, literacy and social activism through the systemic use of high-quality literature. Check out their Read for Empathy guide.

Round Table Books @BooksRound
An inclusion-led bookshop based in Brixton. Follow to find the latest books by underrepresented writers and illustrators from a wide variety of UK and Irish publishers.
Hot Key Books YA and Teen @HotKeyBooksYA and @HOtKeyBooksTeen
Publisher of popular modern fiction for teens and Young Adults. Follow for new and exciting titles.

A nationwide rail strike has been called by RMT union to take place for 3 days on Tuesday 21st, Thursday 23rd and Saturday 25th of June.

The advice is not to travel between Tuesday 21st and Sunday 26th June and make alternative plans on all days as the fleet will not be in its usual positions and therefore the impact of the strike will also be felt on non-strike days.

There will be no replacement buses or alternative travel provided.

For further information go to Northern Rail or Trainline

Well done to all students for remembering to bring water bottles to school and filling them up during break and lunchtime.

The music department has a busy week ahead.

Rehearsal Monday 20th June 3.15-4.15  for all those performing in the Cheshire Show.

Wednesday 22nd June performance at the Cheshire Show – (if your child is performing, please complete the form sent out on Parentpay)

CONGRATULATIONS to former student Connie Gavin who has been awarded a First Class Degree in Music from Queen`s University.

Please remember to take any hay fever medication before school every day. The pollen is particularly strong this year and the school does not supply allergy relief.
If your child does require hay fever tablets during school hours, please fill in this form and send a packet to the office.

Unfortunately the school has decided to cancel the hoodie order due to the supplier being unable to meet the extended deadline.
We are really disappointed about this – everyone who has ordered will receive a full refund directly from the supplier.

On Tuesday we will be holding our sports day for the first time in since 2019.
The weather is looking good and we are all excited for this event.
All students will compete in various events and collect points for their teams. Some students will also take part in running races supported by the whole school.

We would like to remind students that the correct St Nicholas PE must be worn. No hoodies are allowed.
Leggings can be worn but only with skort or PE shorts on top.

This is an all day event so please wear sunscreen, bring a cap and plenty of fluids.
Please also remember to take hayfever tablets and carry inhalers or epipens.

This free virtual session, delivered by All About STEM will take place via Zoom at 6pm on 7th July. It’s an opportunity to learn a little more about apprenticeships and meet a wonderful special guest apprentice, Lara, who will be sharing a little bit about her journey and her current role working in cancer therapy.

Thank you to those of you who have signed up for the lottery – yourschoollottery.co.uk
One of our supporters has won this week – £20. We’ll done!
Thank you also to many of you who have bought tickets for the summer raffle on ParentPay.
We have lots of super prizes – best of luck everyone. 🍀
We wish Year 11 a wonderful prom this evening.
All the best.
Your PTFA 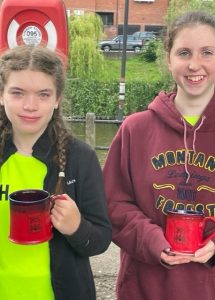 Well done to Rhian Dobson and Ellie Hankin who to part in a rowing event at Bridgenorth at the weekend and won  over a 500m sprint.

Great performance by all – well done!

Thursday – Year 7 Mid-Cheshire Minors Competition
Imogen Ward became 800m champion, Nancy Carrington became 1500m champion and Josh Parkin became the 100m and 800m champion, the girl’s relay team (Imogen Ward, Annabelle Hunter, Bella Sayle and Sophie Eaton) only just beat The Grange to become champions (St Nicholas 61.26 and The Grange 61.84).
We had several 2nds and 3rd places – Annabelle Hunter 2nd and Nneoma Njoku 3rd in 100m, Brandon Williams 2nd in the 200m, Nia Costello 2nd in Shot Put and 3rd in High Jump and Guillem Castello was 3rd in Long Jump.
They will all compete again on 20th June at the Cheshire competition, Victoria Park, Warrington..
Saturday, we had 18 students representing the Mid-Cheshire team at Ellesmere Port Sports Village.
Dan Daley became Discus Cheshire Champion.
Joe Priestley became High Jump Cheshire Champion.
Scarlett Stapleton was 2nd in the Long Jump.
Erin Carney was 2nd in the 1500m.
Tommy Taylor was 2nd in the 3000m.
Elise Fawkes was 3rd in the 300m.
The top two will compete next Saturday at the Mason Trophy Inter County Champions in Stoke.
There were many other excellent performances and many personal bests on the track.
I am looking forward to our sports day on Tuesday 21st June, where I hope school records will get broken.
Mrs N. Simms –  head of PE.

Girls’ and Boys’ After School Sports

“Everyone matters, so attendance matters”

Twitter for updates and insight into what is going on in school.